Like most people, I'm always reluctant to upgrade Windows. There's a widespread theory that every other release of Microsoft Windows is terrible:

So when Microsoft announced Windows 11, I assumed it was going to be one to avoid. However, I've heard a few reports from early-adopter friends who didn't hate it, so I decided to give it a whirl. Here's what I found:

There are quite strict hardware requirements for upgrading to the latest version of Windows, so if you've got an older PC then don't be surprised if you aren't able to make the switch. Specifically, your computer needs to have a Trusted Platform Module (TPM) 2.0 chip - here are instructions to check if your computer has one.

The installation process was pretty smooth, didn't cause any problems and took about 40 minutes, during which time it restarted a few times as advertised. Once it started, my applications and data were exactly where I'd left them. So far so good.

For me, the first hour of using a new operating system is the hardest. I spend so long using my computer each day that most commands and gestures are subconscious, and so I really struggle when things move about.

The most obvious change was that the programmes in the taskbar had moved from the left to the centre.

Not a problem, I hunted around in the menus and found how to move them back to the left side (it's under Personalisation -> Taskbar -> Taskbar behaviours -> Taskbar alignment). They also don't have labels, which seems a bit weird because I often have multiple Excel spreadsheets open at the same time, and it was going to prove hard to identify them easily.

Also, my quick links item in the task bar had vanished. This disappeared from Windows a long time ago but I use it all the time, so I'm used to having to work out how to re-add it every time I upgrade. I'm sure I'll work it out eventually, but for the moment every time I want to open a new programme (every minute or two) I have to open the start menu and hunt down the list for it. Boring.

Generally, I like the new look and feel, it's quite gentle and encouraging. The icons have become softer and more colourful than the square-edged Windows 10 style, and everything feels a bit more friendly.

The next thing that confused me was that the right-click menu, which I use dozens of times an hour, had been redesigned. 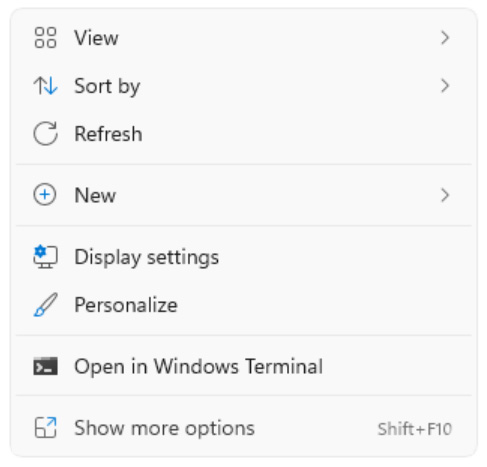 Gone were the actually useful options that I'd spent ages configuring, to be replaced by generic options and a "Show more options" item that displayed the actually useful menu items. No problem, a quick search found a registry hack to turn that off.

After a few hours of trying to use the new start menu and taskbar, I gave up and installed the fantastic StartAllBack which returned the Start menu and taskbar to the same functionality as Windows 10. It also allowed me to get the quick launch icons back, hooray! My productivity has returned to normal.

Two things annoyed me about Windows Explorer that I fixed too. The first is that there is an enormous amount of spacing between the folders in the list view, this was easy to fix as there's a "Compact View" option in the file explorer options.

The second is something I really loathe - the list of user folders in the top left that it's hard to remove - Desktop, Downloads, Documents, Pictures, Music, Videos and OneDrive.

I never use these folders as they don't get backed up by our office backup system, and I'd rather they weren't there. After every Windows update and every new release of Windows, I have to find the registry keys to remove these icons (here's a link to it).

End of the first day

It's amazing how quickly you get used to something new. I'm starting to like Windows 11, when I look at Windows 10 now it looks all square and dull. I'm still perplexed as to why Microsoft have removed some features that I used to use without giving any easy way to restore them. But Windows 11 is working well for me, all my programmes work exactly as before and I haven't had any problems with hardware that I've got connected to my PC.

I'm still not entirely sure why they released it, it doesn't feel any different at all to Windows 10, except for a few interface changes. Apparently it has a bunch of security improvements, but I'm happy to report that they don't get in the way of using it.

So next time your computer prompts you to upgrade to Windows 11, I'd say go for it.

I've been taking some simple steps recently to improve my privacy online, read on to find out more.

Over the last few months we've been creating a short introductory video for our home page. In this blog, Mat explains the steps we went through and shares some tips for making your own.

"Iteracy have that great combination of excellent technical understanding and ability to communicate in everyday language!"