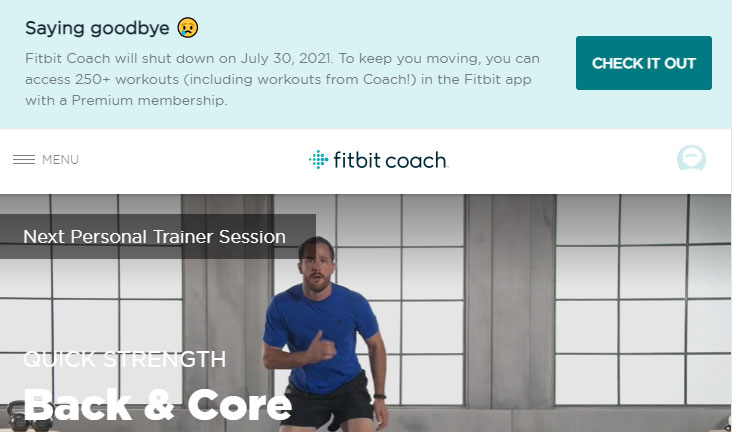 Like all good personal trainers, my relationship with the at-home exercise app has been very much love-hate. I started using it in May 2017, beginning with a Fitness Test and then continuing with 20-30 minute routines that combined bodyweight strength training and cardio exercises. The app invites feedback on each individual exercise (brutal 😓 / just right 🙂 / too easy 😉) and a score out of 5 for the routine as a whole. This data is used to customise the exercise programme and give progression so the challenge (and hopefully your fitness) increases.

There are short videos of each exercise, a timer/rep counter and inoffensive electronic music. Your chosen trainer (Adrian in my case) introduces each exercise and gives you a motivational comment at the end ("I'm loving your progress" or "I'm so impressed I want to get down and work out with you!")

Mat will be able to attest to the fact that Adrian has received a great deal of flack from me during my 4 years of training. There has been a lot of fussing and moaning. At the start, it felt like there was a huge range within the same routine from extremely easy to totally impossible. Sometimes the combination of exercises felt clunky and ill-thought-out, such as three varieties of pushups in a row.

Undoubtedly this was largely related to my fitness; as I've grown accustomed to the exercises and increased my fitness they have become easier (although certainly not "too easy"). However, I suspect the algorithm has also been refined over time. It's not perfect but overall it feels more balanced these days. I'm not sure how much my feedback has been a factor in the workouts that are generated; I've been telling Adrian that alternating one-legged pushups are brutal since day one but I keep being made to do them.

All this is to say that Fitbit Coach has become a key part of my weekly routine (particularly during the Covid19 confinement) and through it, along with other forms of exercise, I've made slow and steady progress with my fitness. So I was very disappointed when Fitbit announced that it was being shut down at the end of July 2021. I know it's not real but I'll still miss Adrian telling me "If I could pick an MVP, that MVP would be you".

As a Fitbit Coach subscriber, I've been given a free Fitbit Premium subscription for one year. Neither of these apps requires you to own a Fitbit (the wearable device that measures your heart rate, sleep and exercise levels). With Fitbit Premium you get a huge range of video workouts, meditations and nutrition advice but it's not personalised like Coach, and as is usually the way with bundles there's a lot I'm not interested in. Plus $79.99 a year is quite a jump from the $35 I have been paying.

More than the price hike and feeling corralled into using a product I don't want, there's a sense of loss and sadness. Coach is so familiar and such a part of my routine, and that's without any social or community aspect. Apps like Strava are ostensibly for tracking activities such as running, hiking and cycling but in reality, they are social networks. You can connect with friends, add photos, tag other people in your activities, like and comment on activities and compete with others for titles and trophies.

Strava is a mainstream platform with 76 million users, but the number of subscribers doesn't determine the level of connection. Back in March 2019, I wrote about the demise of Google+, an attempt by Google to emulate Facebook which never took off. However, it did have dedicated users and, perhaps because there were fewer of them and therefore a closer sense of community, I'm sure there were many who lamented its closing.

Online groups can spring up in all sorts of unexpected places. Mat's grandfather was an active participant in a messaging board that sprang up from a Geneology website. The board was primarily to discuss family-tree related topics but a small group of regular users ended up meeting and chatting on a daily basis. It was a safe and friendly backwater of the internet where people from all over the world, in some cases with limited ability to leave the house, could connect with other humans.

This "end of the world" in a virtual environment is not new. The Sims Online was an online world created as a spin-off of the life-simulation video game The Sims, one of the most popular computer games ever made (nearly 200 million copies sold worldwide). An online multiplayer version was released in December 2002 but did not share the same success. After an attempt at re-branding, owners EA Games decided to pull the plug on the virtual world in 2008. Podcast 99% Invisible covered the virtual apocalypse which generated a huge outpouring of grief amongst its select but extremely close-knit followers. It may not have been IRL but the relationships formed and emotions felt were genuine.

It's easy to dismiss virtual worlds as being less meaningful than communities based on face-to-face relationships, but the truth is they are as "real world" as anything that doesn't involve a computer screen. Yes, there are all sorts of problems related to social media that need to be addressed such as data harvesting, abusive behaviour and misinformation amongst many others, but they form an integral part of most of our lives. It's often not until they're gone that we realise how much they mean to us.

How many coders does it take to write a line of code?

In this blog we'll look at what makes a good password and how to choose one.

"Iteracy were beyond helpful in realising my dream website that is both perfectly functional and visually pleasing."